Within several days, she developed a daily routine that she insisted on following. Maggie was a very friendly dog and she wanted all people and dogs to be her friend. She went to the park everyday regardless of the weather and looked forward to meeting her friends there. When she went to the vets, she always went into the vet's office to see if he was in there and get him to pet and talk to her.

On January 15, 2015, she died from Auto-immune anemia. She showed no signs of being sick until the day before she died. She will be missed by her owners, her vet and his staff, and a lot of her friends. 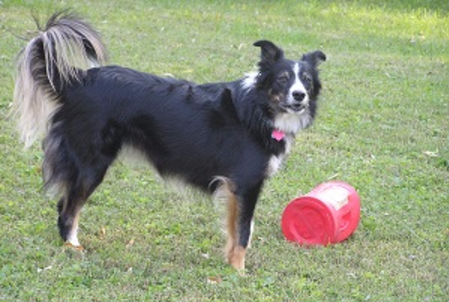 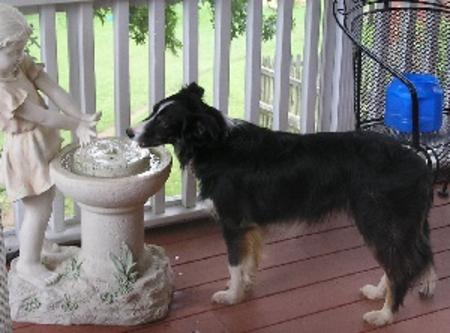 On December 26, 2008, Noel our Border Collie for 15 years went to dog heaven. In mid January 2009, we contacted East Tennessee Border Collie Rescue and filed an Adoption Request. In mid-February, Suzanne contacted us and said she had a dog that she thought was suitable for us. We went down to her house and ended up adopting Maggie Monday.

Maggie slept all away back to Lexington and went into the kitchen and acted as if she had been there all her life. Several days later we had an empty Folgers coffee can by the back door. She picked it up and started playing with it. From then on Folgers coffee cans were her only dog toy. She would grasp them by either the top edge or the handle and run and shake them. She could also throw them about 3 feet up into the air and catch them. At one time she had 13 cans as the neighbors gave her their empty cans. They enjoyed watching her play with them.

We had two fiqurine fountains on the deck and Maggie would drink out of them instead of her dog water bowl.