He is your Friend, your partner, your dog.
You are his life, his love, his leader.

He will be yours, faithful and true to
The last beat of his heart.

You own it to him to be
Worthy of such devotion.

On May 7 2014, Chester Bay, beloved companion of Share and Eric, passed on at the age of 16. As our only "boy" for 14 years, we are struggling to adjust our lives without his amazing presence.

Chester was rescued by East Tennessee Border Collie Rescue in May of 2000 at the age of 2. We are forever indebted to this dedicated and fierce group of Border Collie lovers. In particular, we thank his foster family, Bob and Bev for choosing us to be Chester's family and provide his forever home.

We brought Chester home to Maryland, where he enjoyed living next to Becky Lilly Park. We so appreciated the dog community of BLP, and are thankful for his first dog buddy Lucy, who taught him the ropes of being a city dog.

While in the mid-Atlantic, we had the opportunity to continue to provide Chester with numerous opportunities to experience sheep and sheep trails. He was extremely attuned to sheep - and was an "eye dog" as Eric was so fond of saying. That meant he could, if allowed access, actually get sheep to move with the force of his eyes.

In July of 2004, Chester accompanied us on our move west to Boise, Idaho and like us, was awed by his new home. He was able to enjoy and thrive in an off-leash environment among the foothills of Boise. More attune to people he met on the trails, then dogs - he was known for thinking that every woman wearing a hat was his dear friend Jayme, and greeted all accordingly. He also adopted an amusing high-step prance when he encountered dogs on the trail, we have no idea where it came from, but we used to joke that he watched too much Westminster.

Chester, along with Eric and Share, had over the years attended some enthralling sheepdog trials from Big Willow to Trailing of the Sheep -Hailey, ID to trials on Vashon Island, WA and in Locamas, WA. Chester loved those trials and even experienced the "sheep shakes" on occasion (being so excited about getting to the sheep each morning that he literally shook, as if hypothermic).

Chester was a beautiful boy - so beautiful that he was most always mistaken for a female dog. Even in his last years, few knew he was as old as he was - as he showed practically no graying.

Chester was also funny, silly, talkative, and commanded a sweet, gentle disposition. He was a most loyal, adventuresome and versatile friend and, in our minds and hearts, the most amazing Border Collie ever. He truly made us better people by sharing his life with us.

For those of you in the Boise community, we'll let you know about an upcoming Yappy Hour that we will be planning at Memorial Park in Chessie's memory. 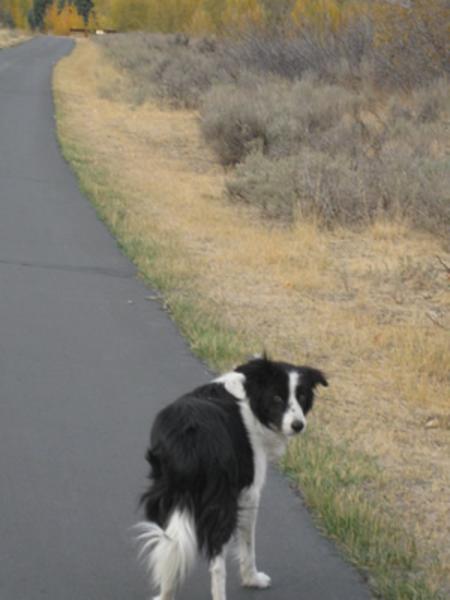